PALM BEACH GARDENS, Fla. (AP) – Justin Thomas was down to his last chance when he delivered his most clutch shot of the final round in the Honda Classic.

Turns out he wasn’t finished.

Thomas nearly holed a gap wedge on the par-5 18th hole for a birdie to force a playoff with Luke List. Moments later, he hit 5-wood over the water, urged it to keep going and lost it momentarily in the darkening sky over PGA National.

“All I was looking at was the water to see if it splashed,” Thomas said. “And it didn’t. So I figured I was in the bunker, and then people started clapping and I could kind of see some little white dot on the green.”

That set up a two-putt birdie that made him a winner when List, who hit his own bold shot in regulation to the 18th to set up birdie, could only manage par in the playoff.

Thomas closed with a 2-under 68 and won for the second time this season. He also won in a playoff at the CJ Cup in South Korea last fall. With eight career victories, including seven in his last 31 starts on the PGA Tour, he moved to No. 3 in the world. He is one spot ahead of longtime friend Jordan Spieth for the first time, which was of little significance to Thomas.

“Not really,” he said. “Because there’s still two more spots that I want to climb.’

List, going for his first PGA Tour victory, shot 32 on the back nine and closed with a 69. His only regret was a tee shot wide right in the playoff that landed amid palm trees and left him little options. He went left against the bleachers, and hit a superb approach to about 25 feet and two-putted for par.

“Obviously, it hurts right now,” List said. “But I think that when I look back on it, I’ll be proud of the way I hung in there.”

Alex Noren (67) finished third. He was tied for the lead when he went for the green on the 18th, only for the ball to hit hung up on the side of the collar of a bunker, leaving him a tough chip. He missed a birdie chance from 20 feet.

Tiger Woods was briefly within three shots of the lead on the front nine. He closed with a 70 and finished 12th.

The 5-wood turned out to be the winner for Thomas. The wedge made it possible.

Jack Nicklaus was in the broadcast booth for most of the final round, leaving before Thomas and List reached the 18th hole. It might have all looked familiar to Nicklaus, the U.S. captain of the 1983 Ryder Cup at PGA National. The big moment that year was Lanny Wadkins nearly jarring a wedge on the 18th hole, a shot so meaningful to the outcome that Nicklaus kissed the divot.

Thomas missed the 18th fairway in regulation and had no choice but to lay up. List followed with his 4-iron to 35 feet.

“I have a lot of confidence in my wedge game,” Thomas said. “I knew if I got a decent number that I was going to be able to get inside 10 feet. That’s all I wanted was a chance to try to get into a playoff. And then ended up hitting a great wedge.”

Thomas and List finished at 8-under 272. It was the seventh playoff in 15 PGA Tour events this season.

Woods made that Sunday red shirt look a little brighter, at least for a while. With an 8-foot birdie putt on the par-4 eighth hole, he momentarily pulled within three shots of the lead. That only lasted the few minutes that it took Thomas to tap in for birdie on the par-5 third.

Yell for Justin Thomas' ball to go in the bunker? You'll be leaving the course early. At least that was the case on Sunday when one fan decided to test the champ: https://t.co/0mcXahSYNZ pic.twitter.com/tc9jkC6m3o

Woods made bogey to close out his front nine, and he still was four shots behind until getting swallowed up again by the water-filled closing stretch. He put his tee shot into water and made double bogey for the second straight day, three-putted the 16th for bogey and was out of hope.

“I made a big leap this week because I really hit it well,” Woods said. “I was able to control it, especially in this wind, which is not easy to do.”

Woods led the field in proximity to the hole on his approach shots at just over 29 feet.

Not to be overlooked was Sam Burns of LSU, who last year won the Jack Nicklaus Award as the top college player who received a sponsor exemption. Playing alongside Woods in such a chaotic arena, he was bogey-free for a 68 to tie for eighth. That will get him into the Valspar Championship at Innisbrook in two weeks.

Five players had at least a share of the lead. Only three of them stuck around until the end.

Webb Simpson missed the fairway on the 11th hole and had to lay up instead of taking on the water. That led to the first of three bogeys in a four-hole stretch and sent him to a 72, four shots behind. Tommy Fleetwood was tied for the lead until a three-putt bogey from long range on the 14th, and a bogey from the back bunker on the 15th. A birdie on the final hole for a 69 left him two shots behind.

from everyone at Dragonfly

Give the Gift of Golf!

What’s better than the gift of golf? Show your sweetheart you love them by gifting them a Dragonfly Golf Course gift card! 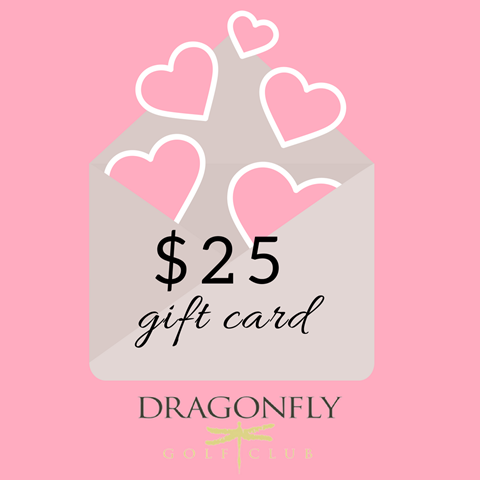 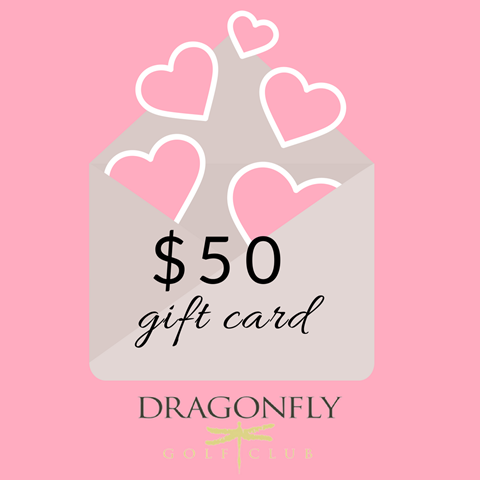 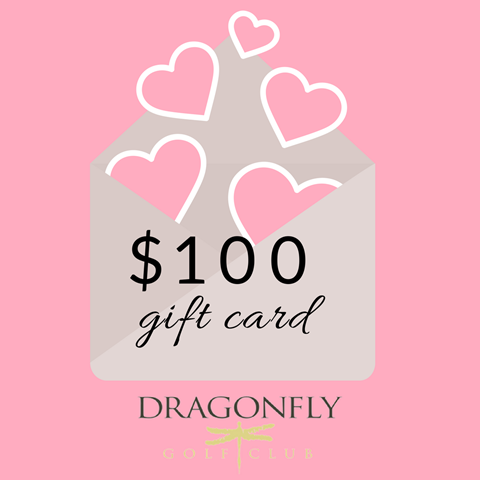 It was a quiet race for Chairman of the PGA Tour Advisory Council. That was until Billy Hurley III made a late splash this week.

Hurley III was going up against Jordan Spieth, Golden Child and no. 3 golfer in the world. It was tough competition, and with just one day left for Tour players to vote, he turned to a classic campaign strategy: mudslinging.

Hurley III released a video pinpointing all of Spieth’s flaws, from him being an elite, “one percenter” golfer, to the ways in which he treats his caddie Michael Greller. Beyond that, Hurley III called attention to his own military history.

The video swept across PGA Tour circles Monday, with many players tweeting it out saying Hurley III had captured their vote. Why? Well, because the video is hilarious and you’d need to watch it for yourself. The impact of the video was so great that Jordan Spieth himself even admitted he would vote for Hurley III.

SCOTTSDALE, Ariz. – It had been five long years since he won, but that wasn’t what was on Gary Woodland’s mind when he made the final putt and pointed to the sky.

He was thinking of the family member who was gone but not forgotten.

“Yeah, that was just kind of a tribute to last year,” Woodland said after shooting a final-round 64 and beating Chez Reavie with a par on the first playoff hole at the Waste Management Phoenix Open at TPC Scottsdale. “Obviously, we lost a little girl, and being there, seeing my wife give birth to her, that’s real.”

Woodland’s eyes flooded with tears. “Just wanted her to know I still love her,” he said.

On March 29 of last year, Woodland released a statement that he and his wife, Gabby, had lost one of their unborn twins. He had just withdrawn from the World Golf Championships-Dell Technologies Match Play, and in the statement he added that “doctors will be monitoring the health of my wife and the other baby for the remainder of the pregnancy.”

Just over 10 months later, Gabby and their son, Jaxson, surprised him on the 18th green as the family celebrated Gary’s first victory since the 2013 Barracuda Championship. Woodland calls Jaxson his “miracle” son, and he and Gabby held him close and continue to do so after the trials of 2017.

“Really took off about four months,” said Woodland, who moves from 38th to fifth in the FedExCup standings. “But I found a way to get to the TOUR Championship, kind of battled through the end of the year, and I couldn’t wait for 2018 to start.”

Said Brennan Little, Woodland’s caddie: “His demeanor has been better. Last year was a bit of a mess. I mean, not really knowing his schedule, missing a few events, going home. Now the wife and the baby have been out; his attitude has been really good, which I think you can see in some of the rounds in Hawaii and San Diego, he got off to some bad starts and brought them back.”

Woodland was trending in the right direction after a T7 at the Sony Open in Hawaii and a T12 at the Farmers Insurance Open. Matt Kuchar, who hung around to congratulate Woodland after the victory, said he played nine holes with Woodland on Tuesday before the start of the WMPO and was wowed. “He was driving it just so well,” Kuchar said.

In addition to his wife and son, Woodland was cheered on by his parents, his sister and her husband, and others from back home in Topeka, Kansas. (He now lives in South Florida.) He got a text from his coach, Butch Harmon, on Thursday, urging him to put four good rounds together and not worry about the score. He did that, and recent putting lessons from friend Brad Faxon paid dividends, as well, as Woodland made 200 feet of putts on the weekend.

“I was in the zone,” he said. “I mean, I really had it going. My caddie asked me when I got done, did I know I made nine birdies. I didn’t even know I did that.”

Now it’s on to California for the AT&T Pebble Beach Pro-Am, and the resumption of a career that for five years was sidetracked by frustration, injuries and loss.

“It’s really hard to put in words right now,” Woodland said. “Last year we battled through it, couldn’t get to the off-season quick enough, couldn’t start 2018 soon enough. For [Jaxson] to be here, it’s obviously a miracle, but I’m just so excited to share this with him and my family, and hopefully it’s the start of something special.”